Confession. Not Such a Bad Thing After All.

I won't post for a few days, but I thought I'd add this one last article from Telegraph.co.uk. Apparently, some are now discovering that confession is a not a bad thing after all.

Americans are flocking to confess their sins as Protestant churches have joined their Catholic counterparts in modernising the sacrament of penance.
Thousands of people are attending confession at weekends and just as many are posting their repentance on videos that are played back to congregations or shared on websites such as YouTube.
New technology is fuelling the boom, but so is clever marketing by Churches that are portraying confession as a form of self-improvement — always popular with Americans — rather than some sort of punishment. 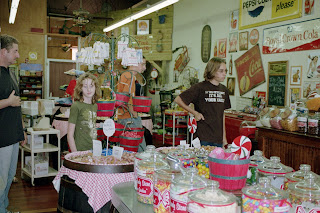 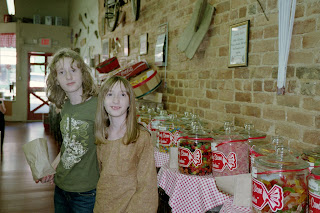 Here are my very happy daughters inside of Opie's Candy Shop in Mt Airy, NC. It is a small shop but very full of different jars of candy. For $4.99 you can purchase a pound of candy. But the fun part is that you can mix and match which type of candy that you choose!
The top photo is my whole brood, Dad and kids deciding which candy to choose. We split into two groups, we girls got our own bag to share, while the boys got another bag.
My sons complained that the girls seemed to get more in their bag but that is because my daughters took more time in deciding what candy they chose.
If you live in NC or are just passing through, a trip to Mt. Airy is well worth the stop.
Here is a link to the store's website.http://opiescandystore.com/index.php
Posted by deb at 2:30 PM 2 comments:

Some More Images From Our Trip to Mt. Airy, NC 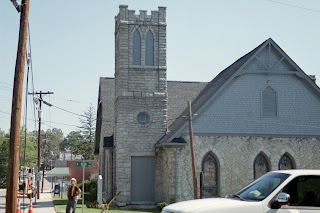 This is a Quaker Church that we thought was interesting. 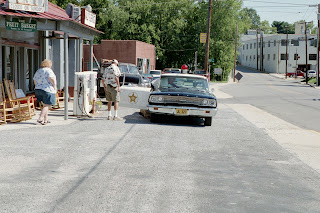 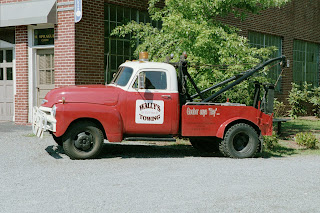 One of the Nicest Towns 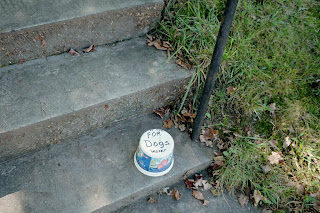 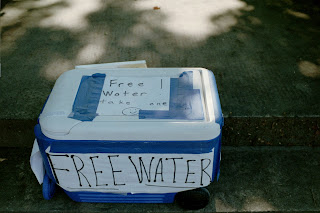 Mt. Airy, NC. must be one of the sweetest, little towns that has ever existed. As we were walking around the town we noticed this cooler and bowl in front of someone's walkway. Not only is the person giving out free water but they included a plastic bowl for those people walking their dogs.
Posted by deb at 1:45 PM No comments: 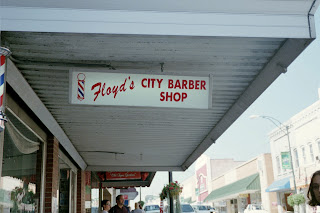 For all you Mayberry fans, there is a real, working Barber Shop named, Floyd's, located in Mt. Airy. When I passed a barber was cutting someone's hair.

Scouring the net, I found this article. The US Holocaust memorial Museum is unveiling a photo album of SS officers that were taken at Auschwitz. You can view the complete album on line.

The photos were troubling, not because they depict the horrors of the gas chambers-they don't- but because there is no indication that the subjects are at all disturbed by the inhuman acts that they commit off camera.

There are shots of SS officers calmly lighting trees, clowning around as they go on a field trip and laughing with their female counterparts. Remember all this is done by men who were routinely gassing innocent men, women and children.

The very normalcy depicted in these shots is grotesquely surreal. How can any human engaging in knowing genocide be able to carry on an apparent normal life without having some qualms over their actions. And yet, apparently these people were able to do so.
Posted by deb at 8:12 AM No comments:

My hubby and I like car trips. We like piling into the vehicle with our four kids and seeing different scenery or stopping at the local attractions. We even get antsy if we don't periodically take one of these trips.

So, we made plans to visit Mt Airy. The location was chosen arbitrarily by us. It is the birthplace of Andy Griffin and the finale home of the original Siamese Twins, Eng and Chang Bunker. Plus my younger brother had once assured us that the area was lovely.

Let me say that Mt Airy is a delightful place. The people are wonderful and very helpful. The town is only about nine thousand people, so we were constantly told to enjoy our visit or asked where we were from. In a town so small I guess that it was obvious that we were strangers.

Mt Airy has a surprising amount of things to do. They have a coffee shop, a three floor emporium, a museum, several diners and Opie's candy shop. Mmmmmm.......

The scenery is beautiful. Mt Airy is located in the foot hills of NC, close to the mountains. So you can see the distant outline of mountains.

It was so nice that my husband said that he didn't want to return to Fayetteville!

Here is a link to a site telling about this very nice town. Please be sure to visit. You will enjoy yourselves.
http://www.visitmayberry.com/
Posted by deb at 7:53 PM No comments:

Purgatory is a place of cleansing. I’ve even heard it described as a process more then an actual physical place. It says in Rev 21:27 that nothing unclean shall enter heaven. None of us can claim to be without sin. (All have sinned, and fallen short of the glory of God." Romans 3:23) Even as Christians we fall sadly short of God’s mark for us. We all have told little fibs, felt envy at a friend’s success, listened to gossip or done any number of things that are displeasing to God. Yes, our transgressions are forgiven but we still need to rid ourselves of the residue that our past acts implants on our souls.

I like analogies so stick with me. Imagine that a poor man is suddenly invited to dine with the king. Excited he leaves home but can not afford any better means of traveling then walking. As he approaches the palace, the poor man is terrified that he will be turned back. Yet the steward assures him that the king is anxious to meet him, but first the traveler must wash and clothe himself in garments that the King (Jesus) has chosen. Should the poor man get angry that the King won’t see him just as he is? Of course not. Does it make the invitation (salvation) any less valid that he is asked to undergo a cleansing (Purgatory) before he enters the banquet hall (Heaven)? I don’t think so and to be honest I don’t want to meet my King without being as spiritually clean as I can be.


Purgatory is not a second chance for Catholics to work their way into heaven-as a Protestant informed me. Those who are in Purgatory are already guaranteed heaven. They are just riding themselves of all the emotional baggage that would prevent them from enjoying the bliss of paradise.

It might come as some surprise to my non-Catholic friends but they too believe in Purgatory, even though they don’t use the term. When I was Baptist, I used to attend regular Adult Sunday School Class. One day, the teacher spoke about different rewards in heaven. A student asked how it was possible that we humans not feel envy that others might be given a higher place. The teacher promised that, upon our death, our souls would be transformed and we would no longer be able to feel envy for one another or even sadness for our loved ones who remained on earth. Now that I am Catholic I realize that he had just, unknowingly, explained purgatory!
Posted by deb at 8:00 PM No comments:

Labels: Catholic, Why Do Catholics.....

When studying the bible one must be very careful to read in context. Isolating verses can lead to misinterpretation of the biblical text. This is very apparent when one actually reads the verses adjacent to Matthew 23:9.

Matthew 23: 9 reads (The New American Bible) Call no one on earth your father; you have but one Father in heaven. Taking this verse literally would mean that we could never call our paternal parent father without sinning. When you consider that the Aramaic form of Father could be translated as Dad, Pop, Papa, etc, then the only thing left is to call our male parent by his first name! Some will say that it is obvious that Jesus was not referring to parents, yet he did not add except for parents. Even if allowances are made for parents, we are forced to conclude that we should refrain from such terms as “Founding Fathers” or “Church Fathers!” The only way to comprehend Jesus’ true meaning is to read the text surrounding this Matthew 23:9.

Starting with the first verse in Matthew 23 and reading onward, we have Jesus exhorting his followers not to be like the Pharisees because “…They preach and do not practice” Mathew 23:3. In other words, these particular leaders were hypocrites, who expected their followers to abide by rules which the Pharisees themselves did not adhere.

In Matthew 23: 5 we are further told that “All their works are performed to be seen...” In other words, these men wanted the fame that comes from being thought Godly with none of the actual work, responsibility or love of God that is required. It was not with the aim to glorify God that these men were serving the poor and keeping the law but only to gain praise for their own selves. Jesus warned the disciples earlier about such an attitude in Matthew 6:1-8

But we reach the crux of the manner when we read Matthew 23:6-7 Jesus says of the Pharisees “They love places of honor at banquets, seats of honor in synagogues, greetings in marketplaces, and the salutation, “Rabbi.” These men wanted honor, respect and glory. They were not humble but prideful and desired titles for themselves.

Jesus instructs his followers not only to not use the phrase, Father, but in verse 8, he forbids the use of Rabbi-or teacher. Our word Doctor is based on the Latin word for teacher. If Jesus really meant that we can no longer use the title Father, then neither are we allowed to call anyone professor, teacher or doctor. We can not even use the heading Mister or Mistress because Matthew 23:10 says “Do not be called Master; you have but one master, the Messiah. Mister is a derivative of Master. So taking these verses literally would mean that no one can be called Mr. Jones, Mrs. Smith or Miss Doe.

In his sermons, Jesus often used hyperbole. For those who are unfamiliar with the definition of this word, hyperbole is an obvious exaggeration spoken to make a point. An example would be “I waited forever.” Of course we know the speaker did not wait forever. We understand that the speaker is not fibbing but using exaggeration to make a point about the length of his wait.

Jesus, himself, used the terms Father and Teacher, when he spoke. In the parable of the rich man and Lazarus, Jesus says that the rich man calls out for Father Abraham. (Luke 16: 24) He speaks of teachers and masters in Matthew 10: 24:25.

Apparently Jesus’ followers all believed that the Messiah was using hyperbole, because they refer to themselves as Teacher and Father several times in the New Testament. For example, Paul not only refers to Timothy as his beloved son in the Lord in 1 Corinthians 4:17 and 1 Timothy 1:2 but even says to his fellow Christians in 1 Corinthians 4: 15 Even if you should have countless guides to Christ, yet you do not have many fathers, for I became your father in Christ Jesus through the gospel.

The beauty of understanding that Jesus was speaking in hyperbole and not commanding that no one use the titles Father, Doctor, Teacher or Mister is that we can look into the deeper meaning of the passage and discern how it applies to us today.

In today’s age of celebrity, a person’s fame sometimes appears more important then their actual morality or worthiness. As Christians we are to glorify God instead of ourselves. That is a message that is still relevant today.
Posted by deb at 1:27 PM 3 comments:

deb
I am a forty-three year old, home schooling mother of four. I have been happily married to my wonderful husband for nearly 19 years!